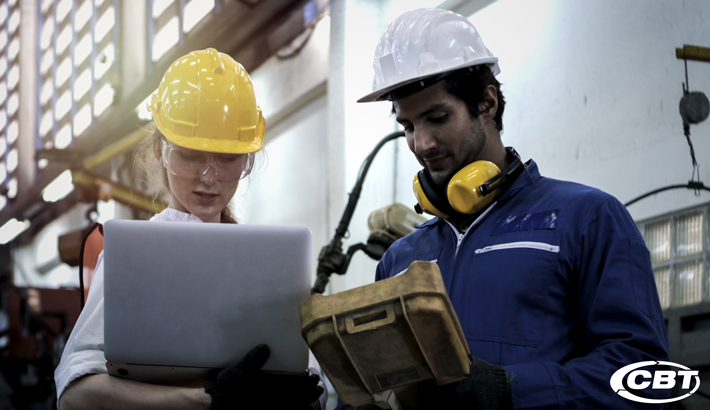 The COVID-19 crisis has pushed several plants to shut down. What should you consider as you prepare to take systems and equipment offline? What can small teams do to ensure future success of the plant? CBT partner Fluke Corporation, has a three-part plan for shutting your systems down, coming back online, and operating at-capacity systems. This is the first installment in the series, stay tuned for the next articles that will help you acclimate as business operations start to return to normal.

These four approaches are inflexible, unsustainable, and miss the root cause because they breed the wrong maintenance culture. A better approach is to divide your asset list into different classes, depending on how you plan to maintain each asset. There is more than one kind of critical.

A better way to classify your assets

A better way to manage this criticality dilemma is to get away from a simplistic “critical” or “non-critical” framework and re-classify your assets into more groups with very important distinctions. Take the preceding criticality scoring criteria and use it to answer one simple question:

What impact does this asset have on the company’s ability to generate revenue? 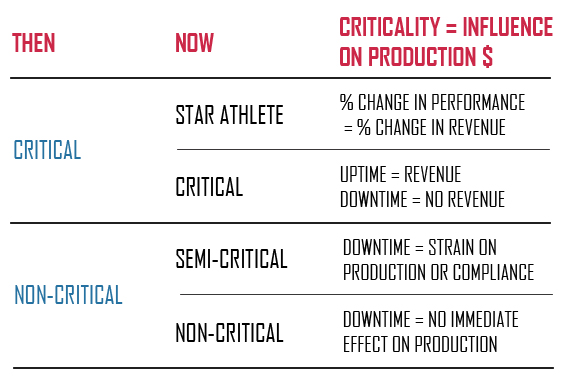 Critical assets can be divided into two groups: “star athletes” and “critical”

% loss of performance = direct loss of % of production or compliance. Needs constant assessment regardless of condition; must always run at peak performance.

“Star athletes” refers to assets that directly determine the company’s ability to win, and by how much. Beyond simple uptime and downtime, there’s a direct relationship between each percentage of incremental performance and the incremental revenue of the company. Every bit of performance improvement means additional revenue. This is where maintenance must be at its peak. These assets need constant attention and monitoring, whether they are brand new or 30 years old.

Examples of star athlete assets include turbine generators, a large engine inside a ship, or a large process kiln or furnace. It’s not uncommon for a basic manufacturing plant to have no start athlete assets, and many companies have just one or two. But continuous process industries, such as oil and gas or chemical processing, often have multiple and interconnected star athlete assets—and maintenance teams, budgets, and tools to show for it.

Downtime/failure = loss of production or compliance. The result can be small or large, expensive or inexpensive, and still be critical.

“Critical assets” are those that must be up and running for the company to make money. Performance is less of an issue that whether the asset is on or off. If things are spinning, conveyors are moving, or hydraulics are actuating, the company can generate revenue. Uptime is the key performance indicator, and the ability to anticipate pending failures is highly valuable.

“Star athletes” and “critical assets” don’t have to be big, expensive, complex, or heavy duty. Sometimes a chemical process can depend on a simple solenoid valve, or a food processing line can depend on whether a $20 motor is dispensing material out of a hopper. Criticality is not about an asset’s complexity, but about the effect it has on the ability to generate revenue.

Non-critical assets can be divided into two groups: “semi-critical” and “non-critical”

Downtime = strain on production or compliance

“Semi-critical assets” are those that, when they go down, don’t necessarily stop production—but they do put strain on the system. Think of a warehouse or distribution center that has four forklifts. If one goes down, things keep moving, but the remaining forklifts must work 33% faster or longer. Or think of a rivet press that goes down, resulting in production personnel having to manually drive the rivets to keep up the production volume.

In some cases, a company or a process can only tolerate the loss of a semi-critical asset temporarily before it becomes unsustainable or the process falls too far out of balance.

There may be reasons to fix these assets, but not because of direct production loss or compliance—those are not affected by non-critical assets.

Downtime = no immediate effect on production

“Non-critical assets” do not affect the company’s ability to generate revenue—no matter how big, expensive, or complex they may be. For example, consider a rotating company sign in from of a building.

What about municipal services, public facilities, non-profit organizations, or other entities that don’t generate revenue? For those cases, replace the idea of generating revenue with fulfilling the organization’s mission, operating within budget, or providing the expected level of service.

It’s important to remember that criticality classification is unique to each company. What may be a non-critical luxury at one company may well be a star athlete at another. There are multiple tools that can help you keep your plant up and running.

We would love to hear from you. Please login to leave a comment!